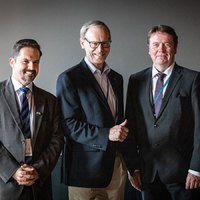 6 hónapja
No One Is Left Behind

This current year, the air is filled with celebration, change, and hope. The dawn of the new ’Reiwa’ (i.e. beautiful harmony) era associated with the new Japanese emperor, His Majesty Naruhito, the entry into force of the EU-Japan Economic Partnership Agreement, a milestone of multilateral economic cooperation, as well as the 150-year anniversary of diplomatic relations give us enough reason to focus on the strong bond with a special country. Let us embark on a thrilling journey with the help of H.E. Kuni Sato, Ambassador of Japan to Hungary… 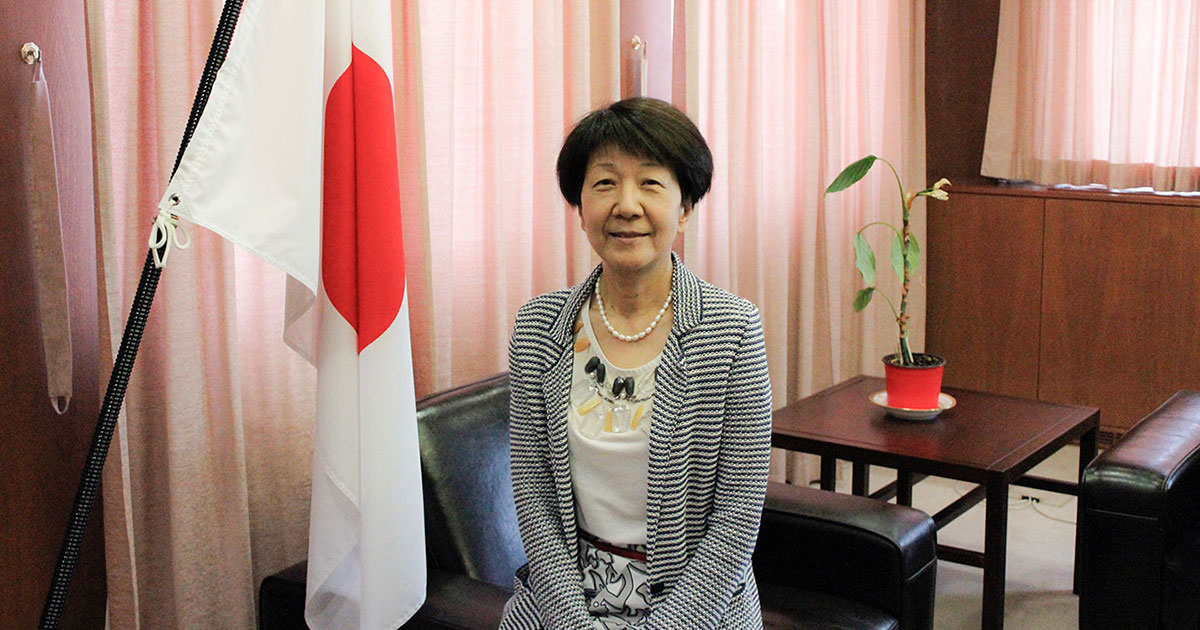 My articles include thoughts and stories by authentic personalities (ambassadors, attachés, and other members of the diplomatic corps, as well as well-known and respected persons) who carry out their jobs as a true mission to build and develop international relations in the interests of fruitful cooperation. One of them is the Ambassador of Japan to Hungary, H.E. Kuni Sato, who is taking us on a journey through the mysterious and exciting world of diplomacy.

Your impressive curriculum spans over a wide range of diplomatic activities (legislation, international agreements, press and PR, WTO, UNESCO, etc.) around the globe. Where does your devotion to public service come from?

It is rooted in my belief in the human abilities to find a solution, which offers a better prospect of life for every participant, nation, or individual. 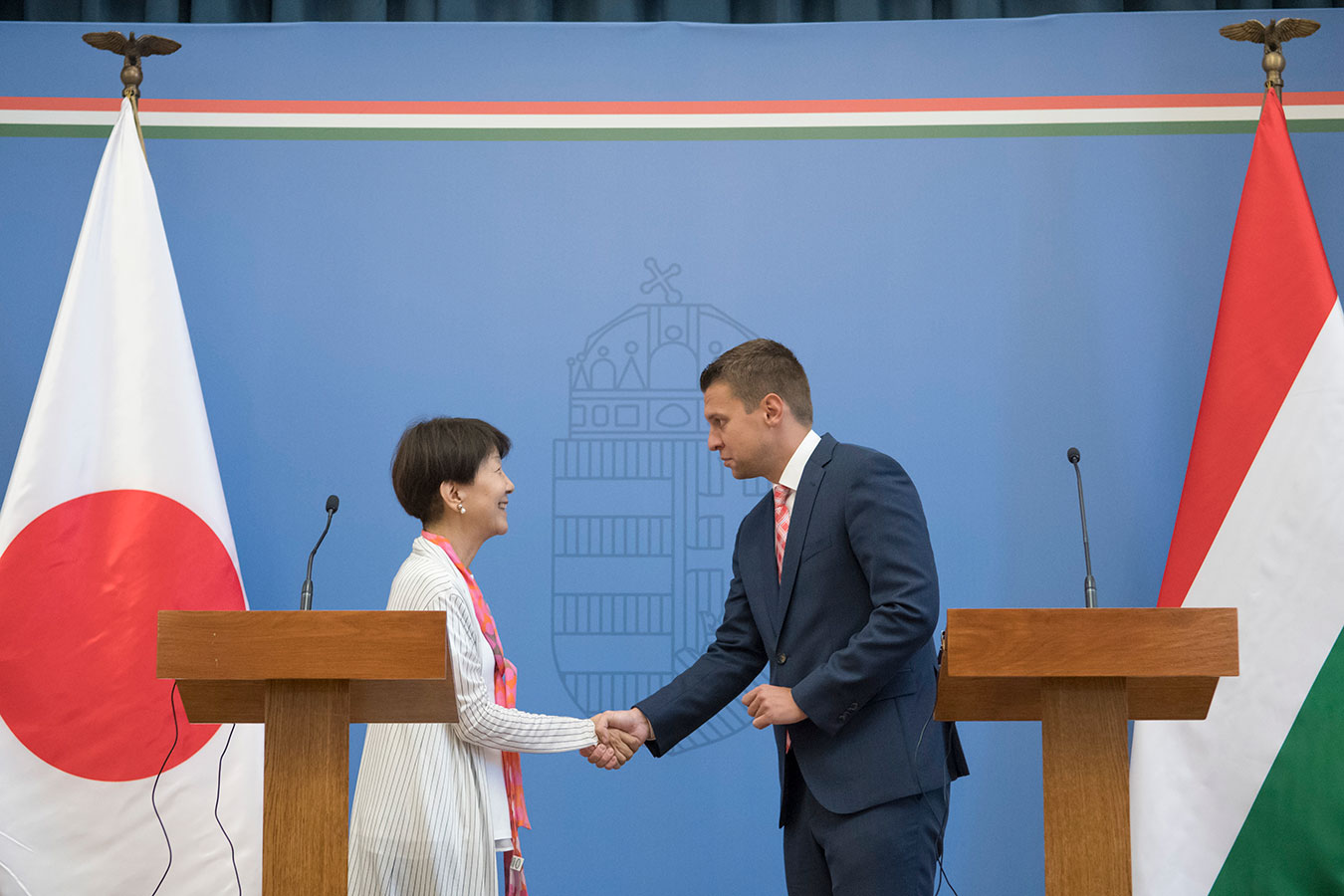 At the presentation of the logo of the 150th Anniversary of diplomatic relations between Hungary and Japan (Photo: KKM Protokoll)

What have been your impressions on Hungary and the Hungarian people since you presented your credentials to President Áder in late 2017?

A country and people rich in history, traditions, and culture, and known for their will to survive. 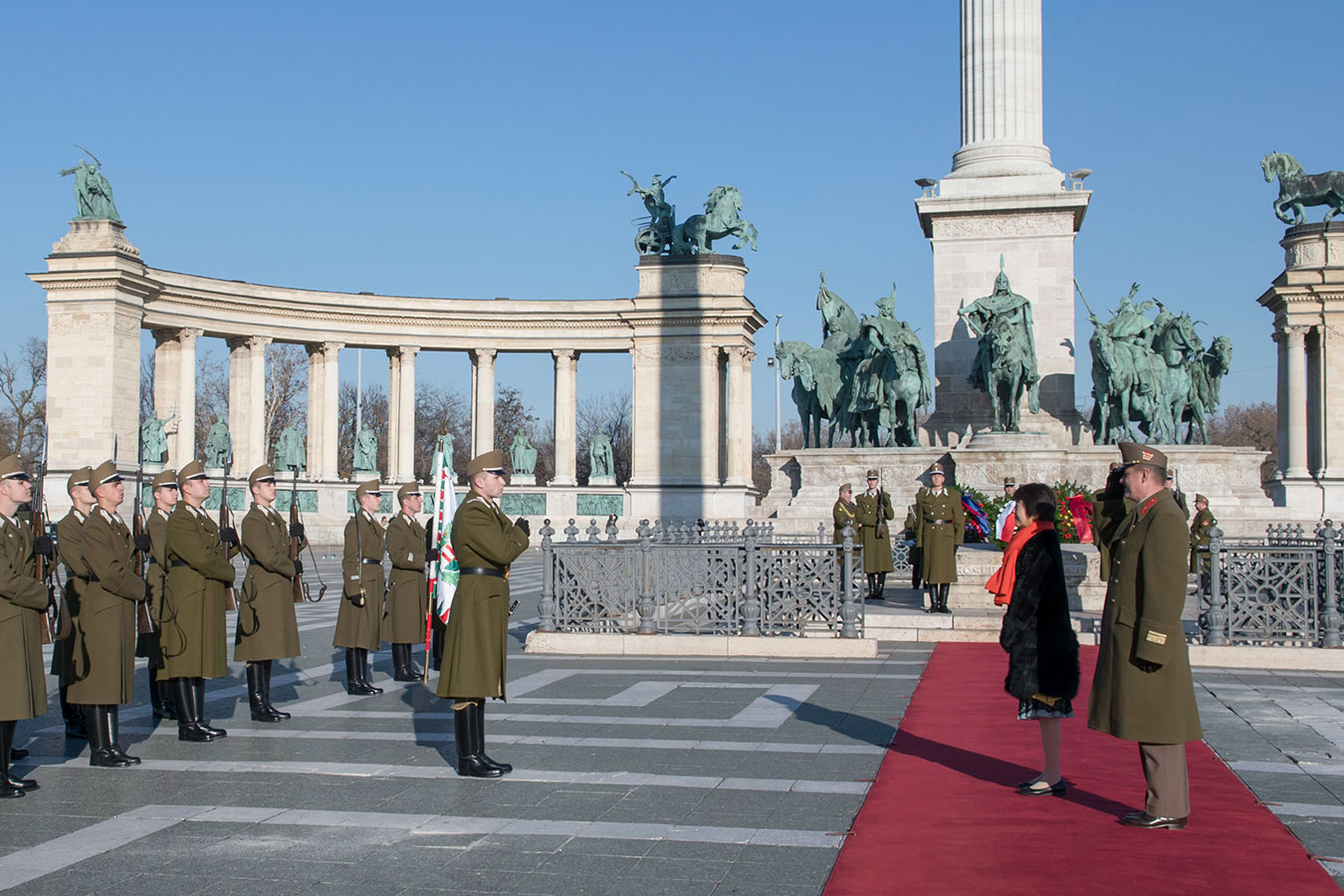 This year marks the 150th anniversary of the establishment of diplomatic relations between Japan and Hungary, so, there is enough occasion to celebrate. Would you please evaluate their development and current state?

We shall break them down to two main stages: To the period before World War II and to the one that came after.

150 years ago, Japan was about to start its modernization and industrialization. Hungary was to enter into its “golden age”, too. Perhaps due to the physical distance of those days, the relationship was not necessarily intense but definitely amicable. Let me mention just a few episodes.

Episode 1: Tokai Sanshi (Shiba Shiro, 1852-1922) meets Lajos Kossuth (1802-1894) in March 1887
Tokai was a samurai who studied in the western world in the early Meiji period. He wrote and published a series of literature entitled ‘Strange encounters of a Beautiful Woman’. In this journalistic-fictional writing, he passionately wrote about the Hungarian revolution of 1848 and the life of Kossuth, as was told in the book by a daughter of the latter. Tokai’s interest in Kossuth and Europe was such that he actually visited the revolutionary in 1887 in Torino, where he was in political exile. One should note that the two countries then shared the passion for modernization and for survival in the rapidly changing world. There is no written record of what they discussed in the meeting but one could imagine a samurai and a revolutionary talking about the future, of Hungary, of Japan, and of the world over a cup of espresso, a glass of Hungarian wine or Japanese sake.

+++ Do not miss other interviews and reception reviews! Click the KÖVETÉS button… +++

Episode 2: Imaoka Junichiro spends time in Central Cafe in the interwar period
Imaoka was born in 1888, one year after Tokai met Kossuth. He majored in German at university and was introduced in 1914 to a Hungarian ethnographer, Benedek Barathosi Balogh, who came to Japan for a research project. Imaoka helped him as a German interpreter. Thanks to this encounter, Imaoka became interested in Hungary and learned Hungarian. From 1922 to 1931, he lived in Budapest, frequented Central Cafe where artists gathered. In a letter replying to a request for a meeting, he wrote, “I normally can be found at Central Cafe from 1 to 4 p.m.”. He wrote many articles about Japan in Hungarian newspapers and gave lectures. When Japan did not have an embassy in Hungary, he acted as if he was the consul general. On the occasion of the 140th anniversary of Japan–Hungary diplomatic relations, a plaque was hung at the cafe in memory of Imaoka who loved the cafe and Hungary.

Episode 3: Prince and Princess Takamatsu visit Budapest in January 1931
We move from a cafe to a garden. In 1931, an imperial prince and princess of Takamatsu visited the Varga Márton Horticultural School in Budapest to see a newly created Japanese Garden, completed just in 1928. Recently, I visited the garden, which had been renovated with the goodwill of many people, for its celebration of beautiful cherry blossoms. One of the highlights of Mr. Imaoka’s work back in the interwar period was the preparation for the visit by Prince and Princess Takamatsu.

After World War II, diplomatic relations between our countries were suspended until 1959. It took us another 30 years and the fall of the Iron Curtain dividing Europe to rejoice elevated relations from 1989. 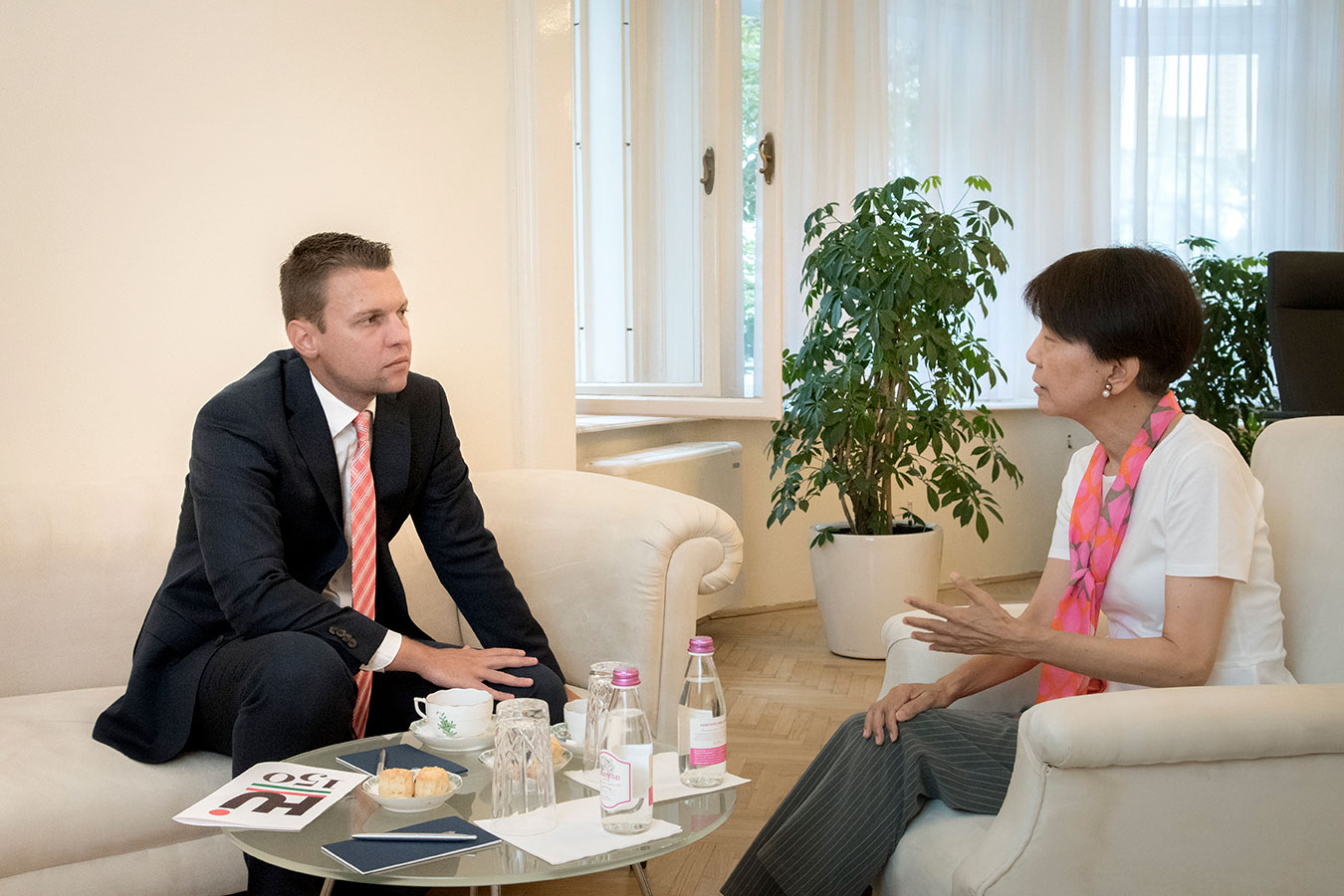 From Ikebana to Wadaiko

There are a number of Japanese-themed cultural events throughout this year. What are you especially fond of when it comes to art?

The opening event of the anniversary was an ikebana [traditional Japanese art of flower arrangement – ed.] demonstration at The Hungarian Academy of Sciences, while the final episode of a long series of festive programs is going to be really dynamic wadaiko [Japanese drum – ed.] performance at The Palace of Arts (MÜPA).

As far as music is concerned, one of my favorite artists, Maestro Ken-Ichiro Kobayashi, came back to Budapest to commemorate the 150th anniversary at MÜPA. He is known as KOBAKEN and as a conductor of passion. Passion is shared mutually: He has been loving Hungary ever since he won the Hungarian Television’s first international conducting competition back in 1974 and Hungary feels the same way about Kobayashi.
The anniversary program started with the national anthems of Japan (Kimigayo) and Hungary (Himnusz), followed by the premiere of a piece composed by Maestro Kobayashi, entitled ‘A Hundred and Fifty Years of Two Homelands’. Then he conducted Liszt’s Piano Concerto No. 1, Kodály’s Dances of Galánta, as well as Brahms’ Hungarian Dances No. 1, 4, 5 & 6.

Discipline and respect for traditions are key factors of the Japanese way of life. Though the female role in society has changed in the last century, a significant increase in the number of women in politics and diplomacy would definitely be desirable. However, one more reason to rejoice in having a Lady Ambassador representing your country! As former Ambassador for Women, Human Rights, and Humanitarian Affairs, in which ways can you and your government support this very favorable tendency? What is your agenda on this subject?

One such way is to improve social infrastructure. One example is to shorten the long queues for nursery care services. Another is to give incentives to companies to continue employing women before and after childbirth.

Still another – and perhaps equally important – way is to change the mindset. For example, “ike-men” in Japanese means “nice-looking guys”. The sound would give a positive note. Then came a new phrase, “iku-men”, meaning “child-raising guys”. It is cool to be nice-looking, of course, but it is equally cool for men to be active in raising a child. Such a new role model, inspired by the positive image, would encourage both men and women to be more attentive to families.

A good balance between work and private life is now an increasingly accepted concept and prevailing in our society. Earlier, long hours of work would prevent both men and women from being active in any other part of their lives other than work. 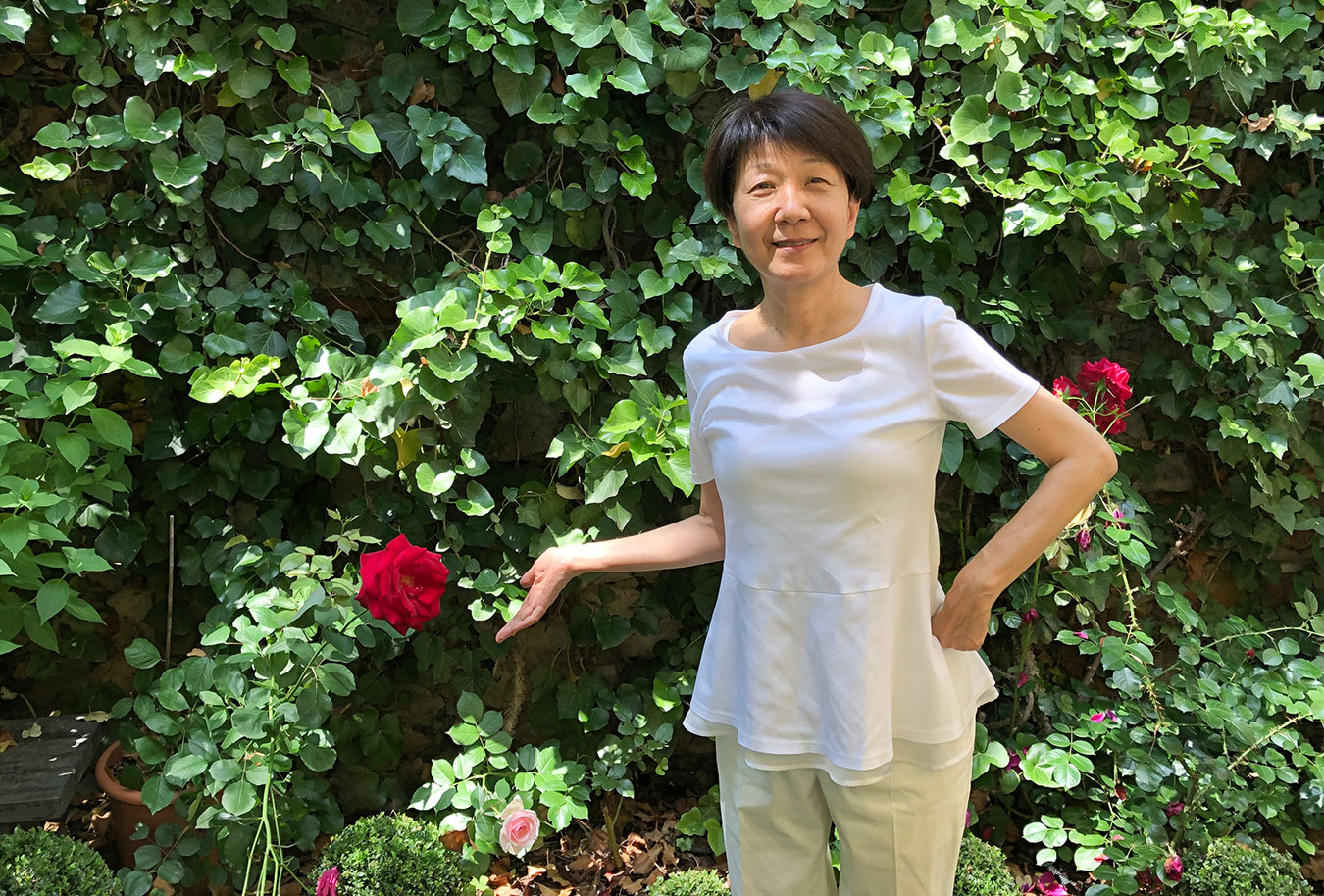 How do you feel about your current mission? What are your goals? What achievements are you really proud of?

One important part of my mission is to deepen the mutual understanding between our two nations. Thanks to the bond we have already been weaving in the past 150 years, it can be performed with the goodwill of many people. I am both grateful for and proud of that. 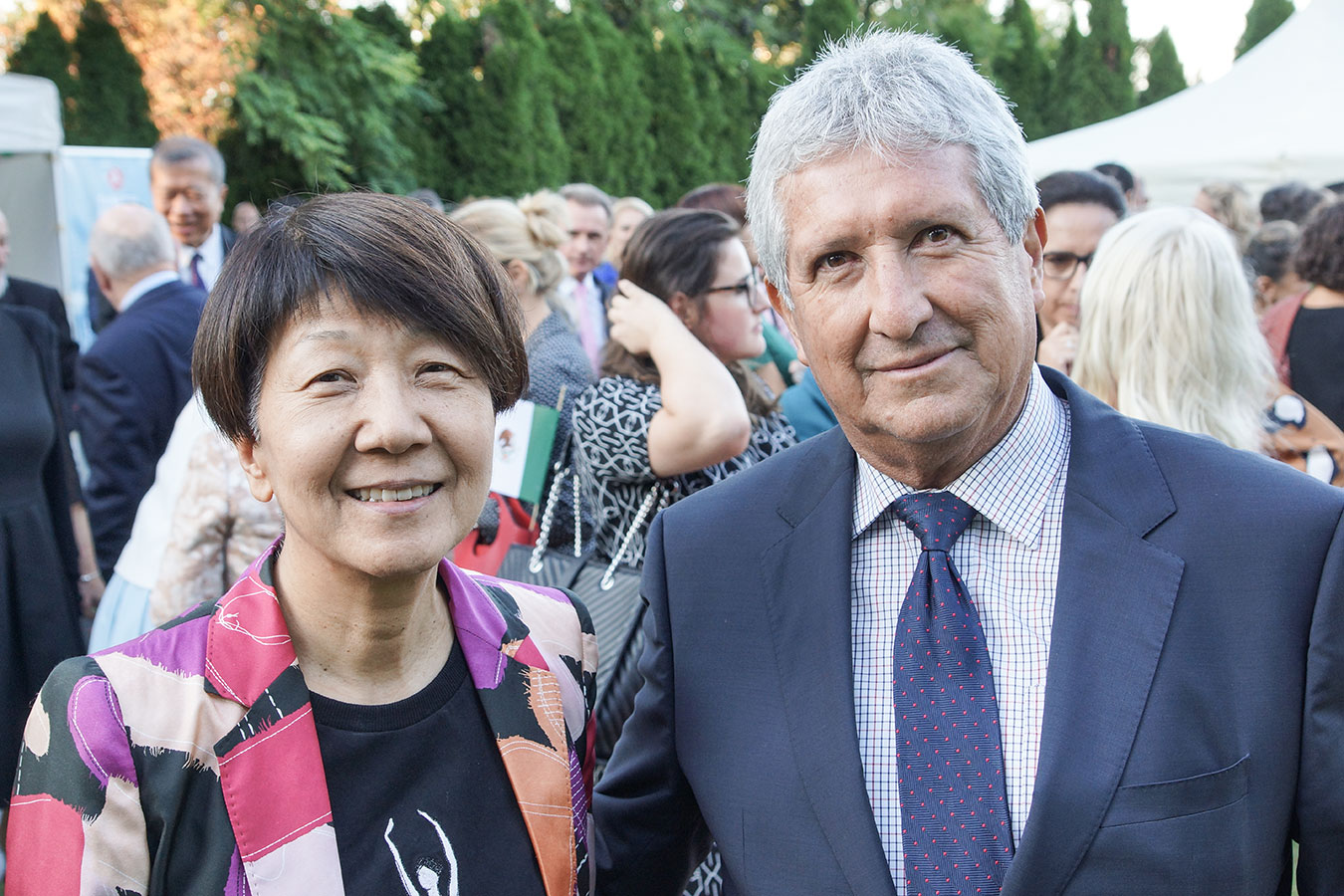 In your opinion, what are the essential elements of being able to create a healthy balance between a responsible career of a diplomat and a loving home, especially for a woman?

One of the essential elements would be her own health. Then, of course, healthy relations among her colleagues at work and among members of her family. They work and live together, helping one another particularly in difficult times. They depend and rely on one another. Ultimately, they share the joy of accomplishment and the relief of cure.

This year mark also the end of the ‘Heisei’ (i.e. achieving peace) imperial era. The 30-year-long reign of Emperor Akihito not only redefined the monarch’s role by getting closer to his people but also showed unprecedented commitment to the reconciliation with Japan’s neighbors. How would you describe this period?

Natural disasters frequently hit Japan during the Heisei period. Emperor and Empress Akihito visited seriously devastated areas and talked to people, closely hearing stories from one person to another. Their attentiveness helped heal the minds and inspired recovery processes. 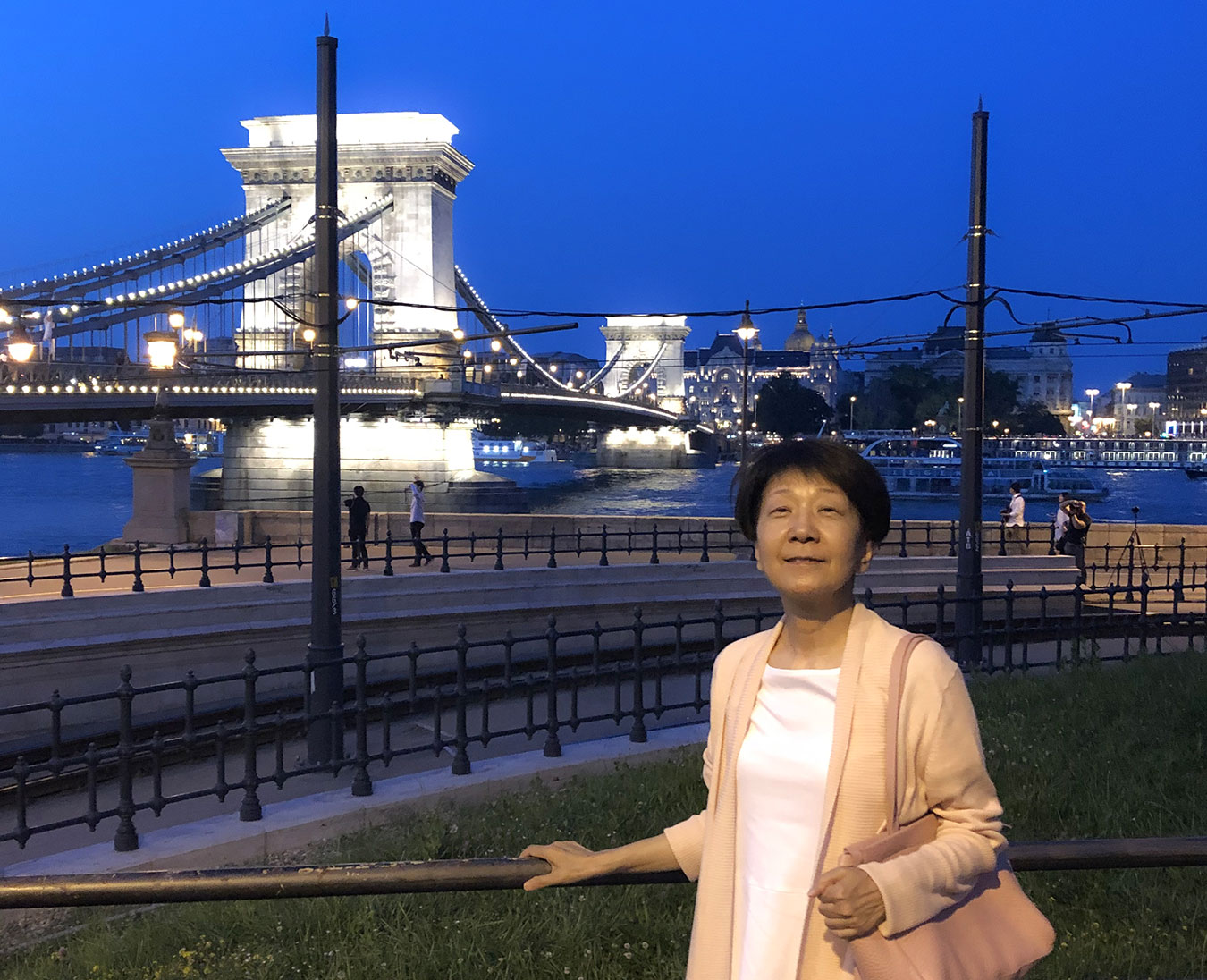 If you had the power to change three things in the world, what would you do?

If the verb of the hypothetical part of the question was “preserve” rather than “change”, I would like to say: If I had the power to preserve three things in the world, I would like to gather forces to preserve UNESCO World Heritages, both tangible and intangible.
Tangible heritages in Hungary include Budapest, including the banks of the Danube, the Buda Castle Quarter, and Andrássy Avenue; the Millenary Benedictine Abbey of Pannonhalma and its natural environment; as well as the early Christian necropolis of Pécs (Sopianae). The folk art of the Matyó (embroidery of a traditional community) and the safeguarding of the folk music heritage by the Kodály concept are typical Hungarian examples of intangible heritage.
As for Japan, Kyoto and Nara are examples of tangible, washoku (Japanese cuisine) and washi (Japanese paper) of intangible heritage.

In many perspectives, these are all precious for our daily lives in order to be culturally rich and environmentally healthy. They also assist our mutual understanding. We should be able to preserve them while adjusting ourselves to the challenges of the time.

Do you want to know more about Japan, the operation and mission of the Embassy of Japan in Hungary? Are you interested in Japan-related programs and events? Visit the Official Website of the Japanese Embassy...